“Peace Is Every Step”

I remember the first steps I walked behind Thich Nhat Hanh, fondly called Thay, on the trail winding thru the woods towards the summit called the power point at The Ojai Foundation.

He invited us to slow way down, to simply head in the right direction, to not make a beeline towards anything or anyone, any opinion, action, or place. Years later we changed the nature of that trail to meander along the contours of the hillside and called it permaculture. I was so relieved to be walking after the sitting practice…walking meditation became something I looked forward to rather than greeted with fear of body pain. I was able to carry the practice into my every day and my every day into the practice. Thich Nhat Han embodied and taught, by his very presence, that old activist saying at the time, we must learn to walk our talk.

Many teachers by that time had come to the Ojai Foundation, thanks to the invites and hosting by Joan Halifax. We were blessed to listen and sit with Indigenous elders, spiritual teachers from different cultures, healers from different pathways, practitioners, and visionaries of a peaceful culture. That was our mandate, our prayer, our shared intention after all…to somehow become part of the healing in our world, to remember or discover, find and live into a new story of peace.

When Thay came I felt we were on a good path …not only then but still today. What it was to not take sides in the Vietnam War, what that would mean in our world as well as our country today. Thay offered us the vows to become a peaceful warrior – to take a stand, to bear witness, to walk in prayer and action in such a way that I am still a student of today. The vows we made were more challenging to undertake than any protest or demonstration I had yet shown up for.

Roshi Joan mentioned in her tribute already, the retreat with artists …such inspiration that flowed thru each as they, as we, deepened into the silence. Such encouragement to trust what would come thru in song, poetry, and vision on a page or in a painting once we allowed more room for grace to enter a moment. And, we all knew the value of art that could change, create, and sustain a culture.

The retreat I remember most however was with a hundred environmental activists gathered at Camp Shalom in Malibu. We had to leave the land at Ojai only a few weeks before – shut down for environmental infractions. Allowing gray water was then illegal only to become highly suggested if not required, a year later throughout Southern California. We were not however, going to cancel the retreat. It was that retreat that gave many of us the patience, courage, and stamina to spend two years raising the money and making the changes needed to return to the land.

Times were changing fast and, in the quickening, it seemed almost a miracle that environmental leaders would stop for 10 days to sit and walk in silence. What came thru the silence, the invitations, and invocations by Thay, the time spent in a deeper listening I still remember today. One well known leader shared in council that in the silence he realized he was not here, or able, to save the earth. Once he fully touched that truth, he became he felt an environmental activist perhaps for the first time. He was truly committed to do whatever he could to protect life, to live a sacred relationship with Gaia no matter what the outcome.

I have wondered why Thay has not been on the front page of every major mainstream newspaper in the country if not the world. His teachings, his presence inspiring us to walk, to engage with love, to look more deeply at the essence and soul of every being we encounter, is more needed perhaps now than ever.

It was at that retreat that I sat with him at breakfast and told him I was pregnant. His blessing was important to me for the birth of my child and became even more important to me thru the miscarriage that followed. Thay always asked us to bring the children to any retreat, to care for the children and their future…something I dedicated myself to do even more after losing one.

It was during those ten days that I met a man whose 12-year-old son was sitting at Thay’s feet. The young man had carried the transmission lamp from Thay at Plum Village when Joan was ordained. His father, Win, was to become my husband 15 years later. With only a few words and a bow, we recognized each other and moved towards each other, well, I guess very slowly.

We are still walking together and fortunately many are still walking the trails up on the Ojai ridge with Thay. His presence is hard to name – more than a memory, a poem, or a teaching, he was, he is and will always be. Of all those who come and go, Thich Nhat Hanh was the humble one, the one who when he first came to North America asked us if we would edit his vows to make them more relevant to Americans – can you imagine – I was not even a Buddhist and was certainly led into the experience of humility thru such an invitation. We often spent two hours sharing one, maybe only two oranges with about 20 of us passing them around under the Teaching Tree; he was the one who brought us into a sense of time that allowed for the beauty to be realized and watered.

During one of his many visits, sitting under the tree, a fire burned towards us only a mile away. Helicopters flew overhead carrying orange chemicals to drop from large buckets. How could he not react? Was he not feeling the war, agent orange, the bombs of his experience in Nam? He invited us into peace yet again and to greet the helicopters as a mindfulness bell. Today I feel many more are able to face the fires and listen for a response that truly may serve the situation. I am forever grateful for his teaching in his steps, his breath, his ways – supporting the Ojai Foundation land to become the kind of sanctuary that it has been for so many.

“Please do not build a stupa for me. Please do not put my ashes in a vase, lock me inside, and limit who I am. I know this will be difficult for some of you. If you must build a stupa though, please make sure that you put a sign on it that says, ‘I am not in here.’ In addition, you can also put another sign that says, ‘I am not out there either,’ and a third sign that says, ‘If I am anywhere, it is in your mindful breathing and in your peaceful steps.” – Thich Nhat Hanh.

In the photo: Thich Nhat Hanh with Wallace Black Elk and Grace Spotted Eagle under the Teaching Tree at The Ojai Foundation. 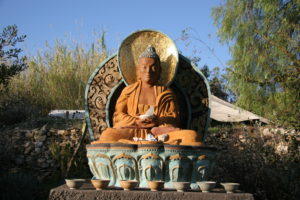 The Buddha Amitabha The Buddha was created by Chkdud Tulki Rinpoche, during a Tibetan Buddhist Retreat in 1983, with many teachings, chanting and ceremony within 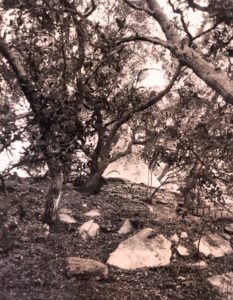 My Story From The Ridge by Kevin Meehan 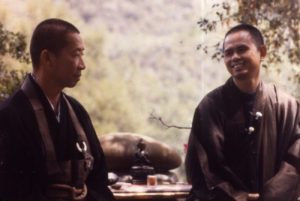 Read More »
READ ALL STORIES FROM THE RIDGE
Share via: