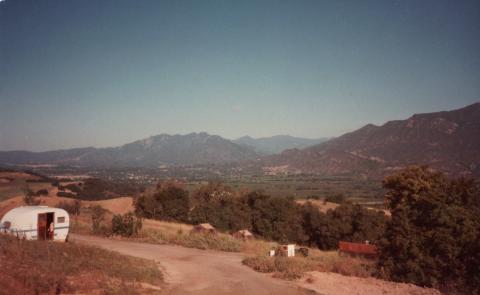 The Ojai Foundation sits on a nearly 40-acre ridge in the traditional territory of the Chumash–Mitsqanaqa’n people. This particular parcel was part of almost 500 acres of land purchased in 1927 by the visionary thinker Annie Besant (1847–1933). Her vision was to create a place in the Upper Ojai Valley to develop an artistic, agricultural, and educational community that would encourage a rich cross-cultural environment in a spiritual climate. The Happy Valley Foundation was created to steward the land and her vision, including overseeing the Happy Valley School, its first formal institution, founded in 1946 by Guido Ferrando, Aldous Huxley, Jiddu Krishnamurti, and Rosalind Rajagopal.

When the Happy Valley School moved from its original location in the town of Ojai into the land of the Upper Ojai Valley in 1975, the Happy Valley Foundation created an opportunity to pioneer innovative and alternative experiments in living on the land. The first organization offered a place on the ridge was led by Lucio “Luke” Gatto, a young spiritual thinker. He created Human Dimensions Institute West, an independent offshoot of a pioneering institution, originally based in Buffalo, N.Y., that was exploring the interface between science and spirituality.

Luke led Human Dimensions Institute West for three years, working to develop an ecologically self-sufficient environment—called a Bioshelter—conceived and constructed by MIT architect and designer Sean Wellesley-Miller, as well as innovative projects in alternative energy, water-sourcing, organic gardening, and spiritual exploration. Shortly after Luke’s departure, leaders of the Happy Valley Foundation, among them the groundbreaking artist Liam O’Gallagher, approached anthropologist Joan Halifax (at that time research assistant to mythologist Joseph Campbell) to take on the leadership of the community developing on the ridge. After coming to the Upper Ojai in 1979, the organization was renamed The Ojai Foundation (TOF).

Joan, with her background of personal study with shamans, Zen masters, Tibetan lamas, Native American elders, and spiritual leaders from around the world, had recently published two books: Shaman: The Wounded Healer and Shamanic Voices, now considered classics in the field. Her wide-ranging ties with Indigenous peoples and her Western academic connections helped to draw an extraordinary faculty to the rustic facility that came to be known, informally, as the “Wizards Camp.” 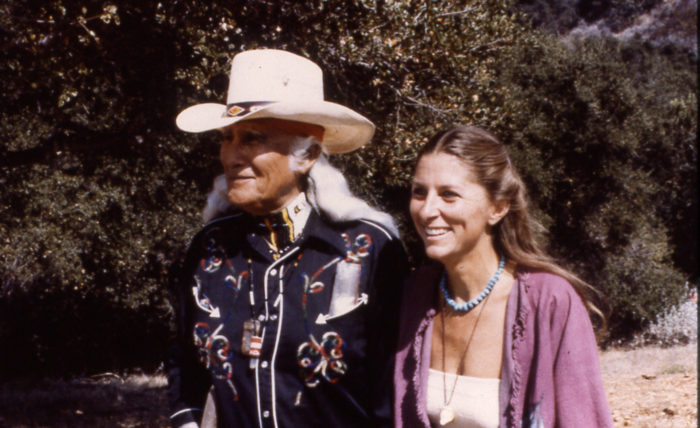 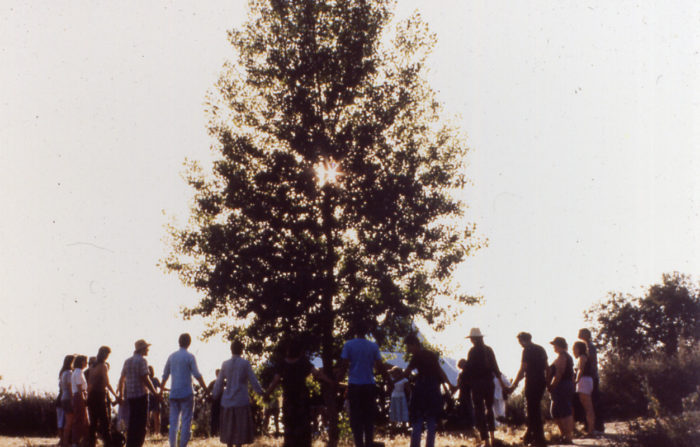 Throughout the 1980s, TOF was the setting for a unique experiment in community living, holistic education, and spiritual practice. The Ojai Foundation became a site for sharing ancient teachings, with an emphasis on learning from Indigenous bearers of wisdom from across North America, in conversation with global tradition bearers and teachers. A distinctive aspect of TOF programs was the resident community’s commitment to dissolving the barriers between faculty, staff, and workshop participants. Out of this emerged an intentional practice known as “Council,” a circle form of communication and wisdom sharing. In Council, each person learns to offer their personal story from their heart and to listen with full attention. There are no fixed leaders, but rather facilitators. The group’s emerging spirit and the process itself are the primary guides and everyone in the circle shares responsibility and leadership for what comes forth.

The many “firsts” at the Wizards Camp included: Men’s Gatherings with poet Robert Bly (author of Iron John); Women’s Gatherings and conferences whose faculty included Mary Catherine Bateson, Naomi Newman, Deena Metzger, Tsultrim Allione, Vicki Noble, Riane Eisler, Terry Tempest Williams, and Laura Simms. Conferences on cutting-edge topics such as chaos theory, hospice work, plant shamanism, ethnobotany, psycho-immunology, dream research, and mind-body studies made for a rich stew. The Ojai Foundation was also one of the first institutions in North America to explore an ongoing dialogue between Tibetan and Native American spirituality (an exploration undertaken at the request of elders from both lineages). Several of the first American retreats for veterans, for children, for artists, and for environmental leaders, led by noted Vietnamese Zen master, poet, and peace activist Thich Nhat Hanh, were held at The Ojai Foundation.

In 1990, Joan left the ridge for Santa Fe, New Mexico, where she founded the Upaya Institute and Zen Center, a center for Buddhist studies and contemplative practice.

The Ojai Foundation continued under the leadership of its Board of Directors, co-chaired by educators Jack Zimmerman and Virginia “Gigi” Coyle. Jack and Gigi, together with fellow TOF elders Leon Berg and Lola Rae Long, played a central role in developing the facilities and disseminating the “Way of Council” here and abroad.

Under their direction, the Foundation’s seminal communication practices spread to schools, businesses, healing centers, spiritual and religious communities, and to many for-profit and nonprofit organizations, including the the PeaceMaker Order, Xerox Corporation, and Spirit Rock Meditation Center to name but a few.

Jack was particularly passionate about bringing Council to the lives of children. With his guiding vision, the Foundation’s council work and “Mysteries” programs at Crossroads High School in Santa Monica (ongoing since the early 1980s) spread to include numerous private and public middle and high schools in Los Angeles, and across the country. Teachers and administrators have praised this work as vital in helping young people develop basic life skills and healthy self-esteem through clear and compassionate communication.

In parallel with these school initiatives, Gigi, in partnership with Jack, Marlow Hotchkiss, and others, explored the use of council in such divergent applications as solo vision fasts and corporate training programs. Gigi carried council into her work with wilderness rites of passage through her role as associate director of The School of Lost Borders.

Increased demand for council programs and training workshops away from the ridge (in educational, organizational, therapeutic, and business settings) led, in 1999, to the creation of the Council in Schools (now Circle Ways) initiative and the Center for Council Training (now Center for Council). Center for Council was established to provide ongoing trainings and programs, in-service and retreat-based internships, and support for organizations, businesses and individuals implementing Council in the world.

Through the 2000s, The Ojai Foundation experienced significant growth in programming and reach — in the Upper Ojai Valley, in Southern California schools, in social service agencies, prisons, businesses and community-based organizations, locally and around the world. The ever-increasing breadth and complexity of the communities being served by Council-based programs has led TOF to spin off our outreach initiatives into separate organizations, fulfilling the vision of bringing Council “off the Land and into the world.” 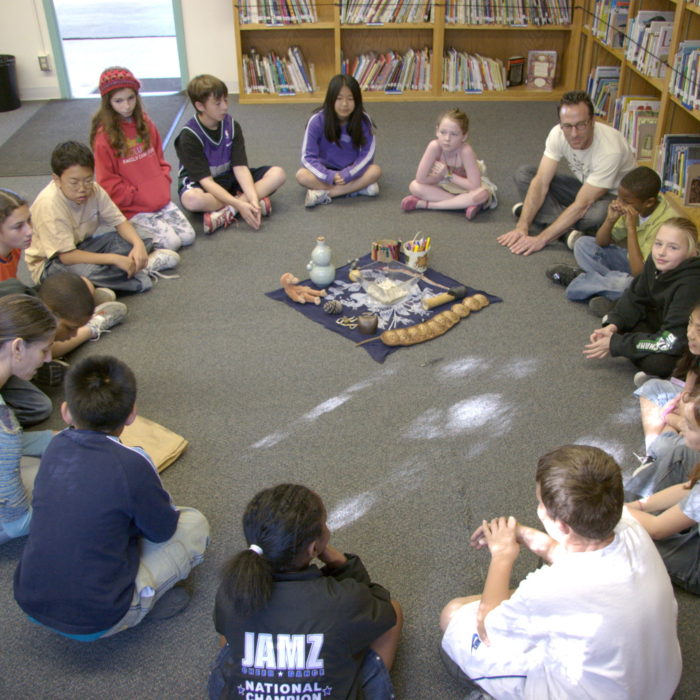 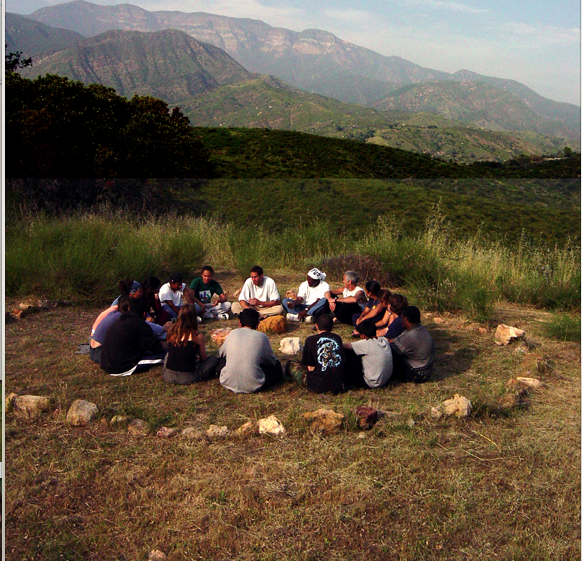 The Thomas Fire and Its Aftermath

In December 2017, the largest wildfire in California history — the Thomas Fire — passed through The Ojai Foundation multiple times, from multiple directions, all within the first 24 hours of the start of the fire. The fire took more than 80% of the infrastructure, all guest accommodations, staff housing, kitchens, and the upper bathroom. It damaged or destroyed all water tanks and much of the electrical and water systems. No irrigation remained. Many plants were killed, damaged, or taken back to their roots. Many animals were killed; others injured. Essential habitat was lost, including all staff and guest housing.

In the wake of the fire, careful attention was paid to recover basic safety on the land, to support regeneration and healing, to restore basic infrastructure and functionality, and to reimagine the future of our work, as well as the shape of the organization.

During this time of reflection, TOF made a focused effort and commitment to take a close, self-critical look at equity and justice in the work of our organization. During these years of clean up and reimagining, The Ojai Foundation made the decision to evolve into something new that would honor the complex and rich history of all that unfolded on the ridge.

Topa furthers the legacy of The Ojai Foundation, particularly its work in creating deeply-connected community and in Council and its staff joins together veteran TOF facilitators with a longtime TOF partner, the arts and cultural organization, Yiddishkayt. The new Topa team is dedicated to carrying on TOF’s educational programs, the ways of Council, and to reinvigorating intercultural work on the ridge, bringing artists and thinkers together to connect and share their ideas with all who come to the ridge.

Join us this Saturday! Capoeira Workshop with Prof